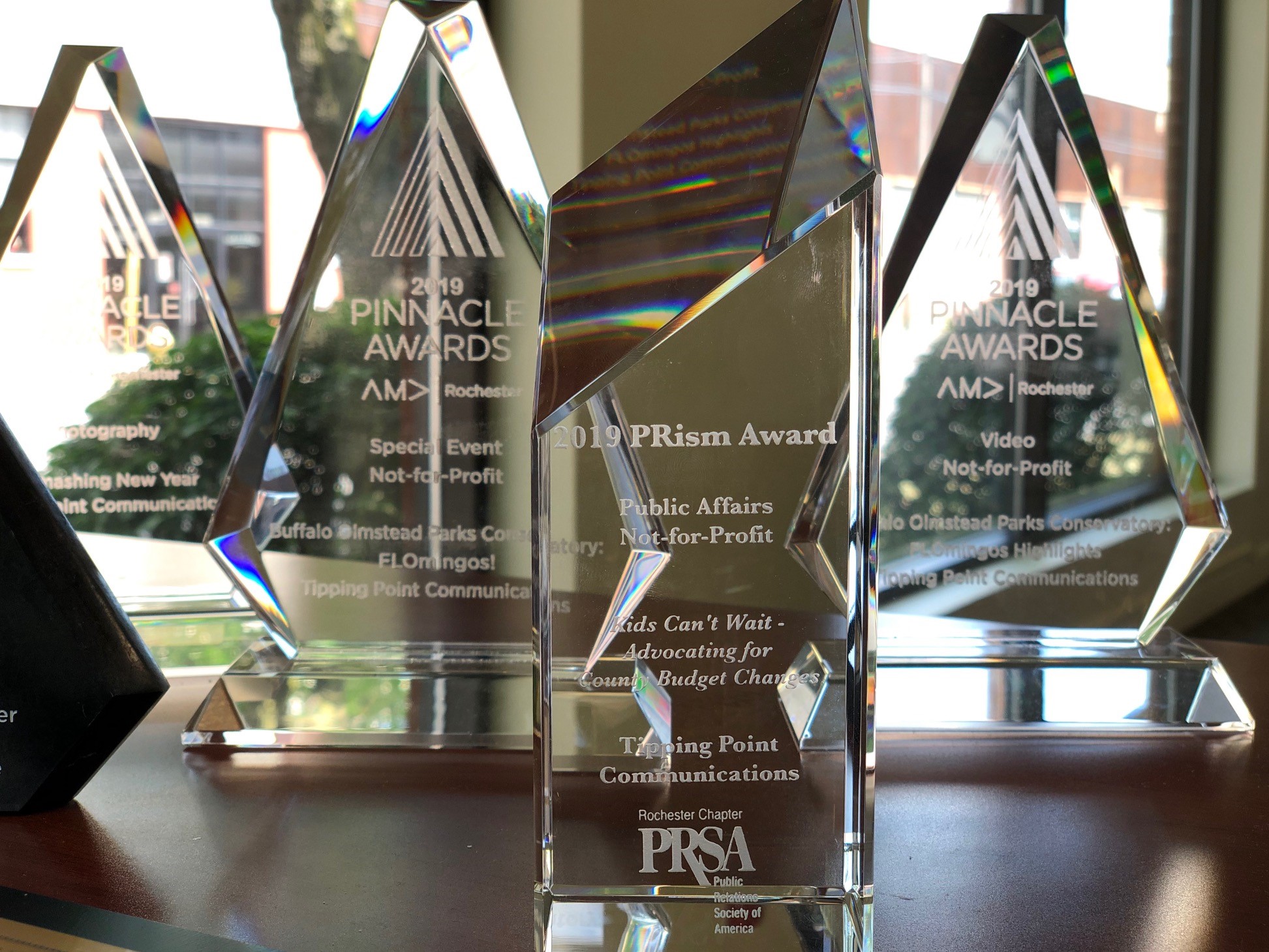 …and what an awards season it’s been. We couldn’t be more excited to share about some of our great work as we look back on our highlights from the 2019 industry awards season.

This year our team took home a total of three first-place awards from the Pinnacles, including two for our work with Olmsted Parks Conservancy in the “Video Not-for-Profit” and “Special Event Not-for-Profit” categories.

Last year, to celebrate 150 years of the Olmsted Parks system, the conservancy sought to increase awareness of the many benefits the parks bring to the communities they serve and to position Buffalo as a national pioneer when it comes to transforming urban spaces. As part of the 150th anniversary celebrations, the conservancy also wanted to reinforce its vital role as a membership-based, community organization whose mission is to promote, preserve, restore, enhance and maintain the Frederick Law Olmsted-designed landscape in the Greater Buffalo area. For our campaign, “FLOmingos,” we took 1,500 pink lawn flamingos and placed them in a line around the Buffalo park to create a fun, visually-appealing spectacle that not only drew attention to the anniversary, but helped Olmsted break a Guinness World Record for the longest line of pink flamingo lawn ornaments. Another 1,500 “FLOmingos” were also placed in flocks around 20 other park locations within Buffalo’s Olmsted Park system. Following the Guinness World Record ceremony, we held an adoption event for the flamingos, offering Buffalonians the opportunity to take one of the record-breaking law ornaments home with them. Any flamingos that were left without a home were recycled into a bench now on display in the park system. In addition to putting on and publicizing the event through earned and social media efforts, Tipping Point also produced, filmed and edited a video to commemorate the occasion.

Our team also took home an award in the “Photography Profit” category for our 2018 holiday card. The card, which featured a photo of our team, used augmented reality (thanks to our friends over Twisted Rope) to bring our team to life and jump off the cover right into the homes and offices of our clients.

We ended awards season on a high note this year, earning a total of six Excalibur Awards (the “Excals,” as they’re often called, are held in Buffalo – home to our second office). We again won three first-place awards for the video, press conference, and social media work we did on behalf of Olmsted Parks for FLOmingos, as well as one first-place award for our work with The Children’s Agenda.

We also earned two second-place awards; one for our work with Anchor Bar on its New York City grand opening press conference, and another for our work with the Rochester Housing Authority on a video designed to make it easier for low-income families to understand their complex leasing agreements. The 25-minute video is now used by RHA during its regular lease-up meetings, can be attributed to a drastic decrease in public housing lease violations since its use began in September 2018.

Interested in learning more about our work? Get in touch with us at info@tippingpointcomm.com.