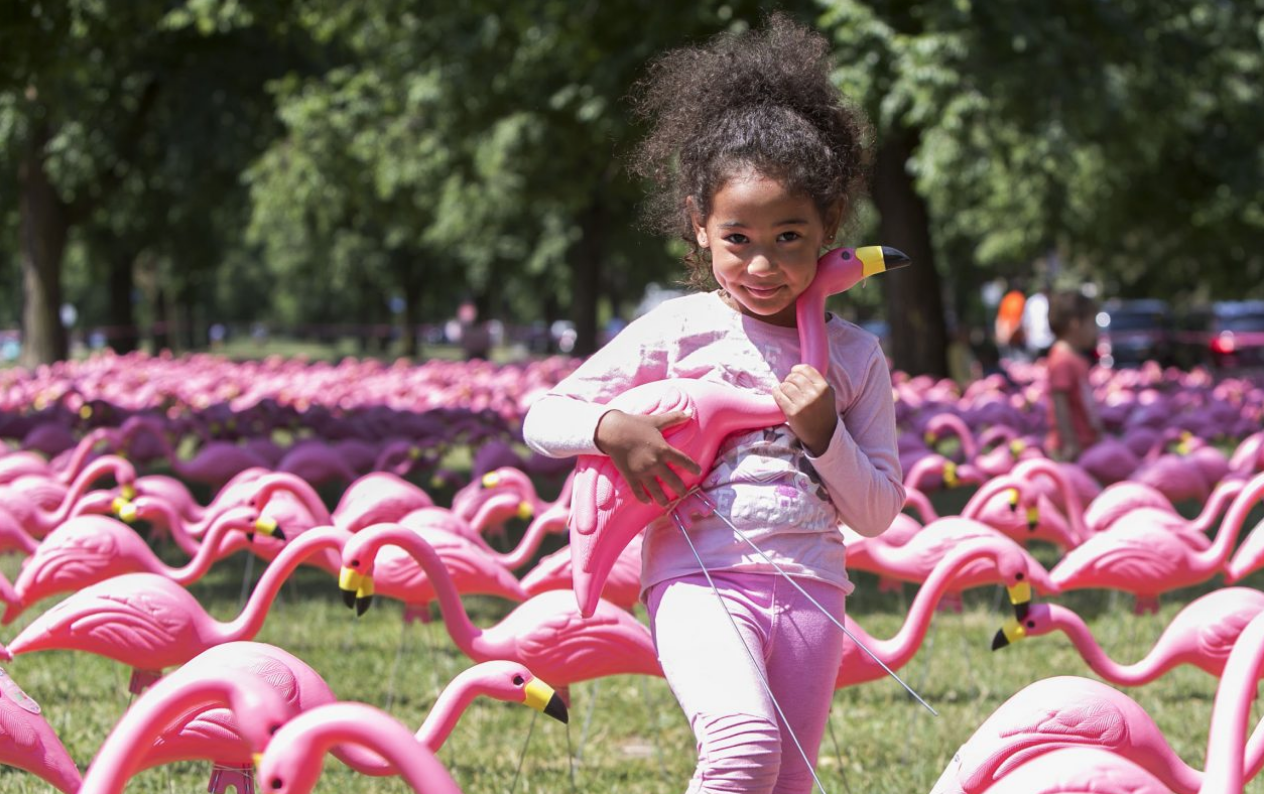 The mind bubbles over with excitement when a client first tells you they want to break a GUINNESS WORLD RECORDS™ title.

A little bit of apprehension and uncertainty of how to pull it off slowly creeps in.

All those emotions came along with the work for the Buffalo Olmsted Parks Conservancy as it sought to break the GUINNESS WORLD RECORDS title for the “Longest line of garden flamingos.”

The park system, the first nonprofit in the nation to manage and operate a historic urban park system, wanted to smash the record held by Pledge the Pink of Callawassie Island, South Carolina, which placed a total of 1,058 flamingos in a line on Aug. 27, 2016.

The Conservancy wanted to go for the gusto and place 1,500 plastic pink #FLOmingos (Fredrick Law Olmsted, the park system’s architect) in a line to recognize the 150th Celebration of the Olmsted Park system in Buffalo taking place in 2018.

“At the Conservancy, we understand that landscape architecture is a specialized profession, but we also feel that Olmsted would have understood the humor in a stunt of placing 3,000 #FLOmingos across his beautiful landscapes to become a GUINNESS WORLD RECORDS record holder,” said Stephanie Crockatt, executive director of the Conservancy. “Additionally, we are using the kitschy lawn art to raise awareness for recycling.”

Half of the #FLOmingos were placed in the park system’s six parks, seven parkways and eight landscaped traffic circles.

Philip Robertson of GUINNESS WORLDS RECORDS confirmed that after months of planning the small of army of staffers and volunteers behind the effort did indeed set a new record. Robertson personally counted that 1,500 #FLOmingos touched in a line totaling 2018 linear feet.

The visuals from the event were phenomenal.

Buffalonians of all ages and backgrounds flocked to get a picture with the #FLOmingos. Many waited in line to adopt their own #FLOmingos so they too would be able to proudly display support on their front lawn or gardens for Fredrick Law Olmsted and the Buffalo Olmsted Parks Conservancy.

All 1,500 of the pink plastic garden flamingos were sold within the week, helping to raise over $10,000 for the nonprofit organization.

The Associated Press also covered the story of the record-winning feat, generating media coverage in more than 200 cities across North America.

The story earned more than 409 million impressions, equating to more than $300,000 in ad value.

* A video produced by Tipping Point was seen by more than 34,300 people on Facebook. The video was shared nearly 120 times. It received more than 160 comments, likes, and other interactions

* Followers grew by 125 on Instagram in one day, with posts receiving 754 total interactions (comments and likes).

The event was a spectacular achievement for the Conservancy, and Tipping Point was proud to be a part of it.

However, the story of the #FLOmingos does not end here.

The 1,500 plastic pink birds displayed around the park system were donated to a local recycling operation that will be recycling the plastic into a bench or display to commemorate the park system’s “Officially Amazing” Guinness World Records achievement.