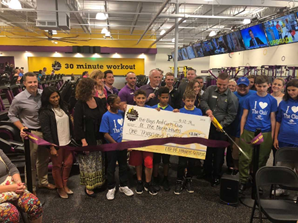 Opening a new location is an exciting milestone for a business, but it can also be extremely stressful making sure all the correct elements are in place. From sending invites in time to the right people, gathering materials and speakers for a press conference, and writing press materials and getting media to cover your event, it all takes time and planning. Whether it’s your first or 50th opening, you want to find a reliable partner to help.

Tipping Point has had the pleasure of supporting a series of award-winning grand openings. In September, we were excited to be part of two more: a Planet Fitness in Hamburg, N.Y. and an Anchor Bar in Rochester Hills, Mich.

ECP-PF Holdings Group Inc., the largest Planet Fitness franchise in the U.S. with more than 70 locations, unveiled their third Buffalo location in 2018. Planet Fitness strives to create a workout environment in which everyone feels accepted and respected—a Judgement Free Zone™ for first-time gym users and fitness veterans alike. Tipping Point worked with the team at ECP-PF Holdings Group to organize three grand opening events throughout Western New York that celebrated each local market while also reflecting the welcoming atmosphere you get when stepping into every Plant Fitness.

For each event, friendly staff and trainers gave tours of the new facilities, and we coordinated a press conference that engaged local politicians, chambers of commerce team members, and ultimately filled each space with dozens of important VIPs, vendors and potential new clients. Entertainment was coordinated for each opening, reflective of the community in which the gym was located. Across the three events in Western New York, media coverage resulted in nearly $40,000 in earned publicity value.

A Buffalo staple, Anchor Bar continues its strategic growth throughout the U.S. As they expand, the Tipping Point team has helped at numerous stages of their journey, culminating in a series of grand openings – most recently in Rochester Hills, Mich. This location marked Anchor Bar’s 15th restaurant that furthers its almost 55-year tradition of serving the best chicken wings in America.

Working with Anchor Bar’s corporate office and its Michigan franchisee, Tipping Point planned an event to introduce the Buffalo tradition to another Great Lakes state. We engaged local government representatives and media, coordinated equipment rentals, and even worked with a local bakery to make a custom chicken-wing-shaped (not flavored!) cake. More than 50 attendees were introduced to the quality and flavor of the world’s original chicken wing with a buffet of more than 18 different flavors of wings. By the end of the event, we had secured 31 different stories that generated nearly $100,000 in earned media value from local, regional, and Detroit outlets. Both corporate and local Anchor Bar teams felt the event was a huge success.

Grand openings are only one way we help our clients introduce new locations to their target audiences. Though they may be among the most fun! Ultimately, whether helping an organization across town or across the county, the team at Tipping Point loves helping our clients grow and supporting their success.